Little Nightmares Wiki
Register
Don't have an account?
Sign In
Advertisement
in: Articles with a placeholder name, Characters, Male Characters,
and 6 more
English

The children have dark skin and black hair, and they wear white shirts and dull blue overalls.

Episode 6 starts with Mono waking up to see some of the Black children running around, panicking because of fire and struggling to open the door and windows that have been boarded up. The fires are doused as the ceiling sprinklers activate, but the relief is short-lived as an unseen figure begins to snatch the children one by one from the shadows. In the chaos, Mono finds a staircase and escapes the room, leaving the other children to their fate.

Many of the Glitching Remains in the game look like the Black children, hinting that they were ultimately left behind after their physical forms were taken by the unknown figure. 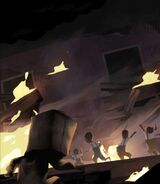 Mono and numerous children in a burning building. 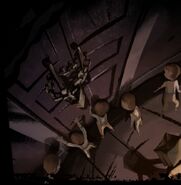 The children trying to escape through a door, but it's locked.

A child getting abducted.

A photo of a Black child that can be found in the School and the Pale City. 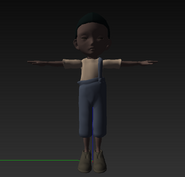 The Black child model in the game files.