Boy who got forked

Boy who got forked

None
The boy who got forked[1] was one of the children who entered the house in the second issue of Little Nightmares (comic series).

The boy who got forked appears to have a fair skin, blonde curly hair, vermilion beanie and sweater, and tan jeans. After being distorted by the mirror, he has another figure resembling him stick onto one of his arms.

He appears to feel lonely as he's been wishing a twin of him. Later, seen from his wish, he has fun from bullying and teasing other children. He's also rather slow in finishing his chores.

Later, he actually cares about his friends and also tries to work together with them, as seen when the children tried to take down the Mirror Monster.

He is one of the children to visit a derelict house, with two other boys and the Humpback Girl. Later, his wish was to have another "him" on his side, so that he could finish his chores faster and have fun twice the size by teasing other children.

When the boy who got strong was snatched by the Mirror Monster, he and other decided to run away. He later found his normal form in the mirror, only to be a bait as the monster snatched a half of him. Due to this, everytime he tried to speak, every words spoken will be split half.

After they defeated the Mirror Monster, he was able to have his normal form back. This allowed him to finally speak normally as well. He along with the boy who got tall tried to find help for the Humpback Girl, only to not come back before the Ferryman was able to kidnap her. 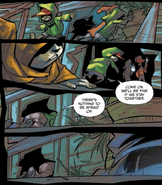 The boy fantasying about being two of himself.

The boy after having his second half taken. 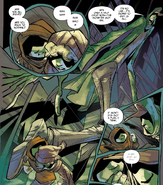 The boy now talking in halves.

The Forked Boy back to normal. 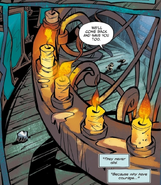 The boys leaving and promising to get help for her.