None
Dark Six is a mysterious character who appears briefly whenever Six feeds in Little Nightmares.

Dark Six has exactly the same appearance as Six, although with shadowy silhouette. She wears a black raincoat that ends just above her knees with black buttons, two pockets, and a rhombus-shaped hood.

In Little Nightmares II, a glitching hologram version of Six appears at the secret ending of the game.

In Little Nightmares, Dark Six appears whenever Six is eating, watching her as she devours her meal. After Six's battle with the Lady. Dark Six can barely be seen in the background where the Lady lies.

In Very Little Nightmares, she appears as one of the boxes that the Girl in the Yellow Raincoat can find in the game.

After the Thin Man took Six, a glitching silhouette of her is left behind. Mono sadly looks at what remains of his kidnapped friend before it disappears.

When the Thin Man was close to getting Mono, the hero detaches a railcar from another to escape from the broadcaster. However, the train crashes to a stop in a subway tunnel, leaving him seriously injured with a destroyed remote. Hurt, but far from being down for the count, Mono pulls himself together and limps out the tunnel where he is briefly accompanied by the Glitching Remain of Six.

In the game's secret ending, after Six escapes from the Signal Tower without Mono, the Glitching Remain of Six appeared and looks down at a picture of the Maw before fizzling and fading away into the wind. This scene only plays if Mono has collected all of the Glitching Remains.

Dark Six watches from the rafters as Six feeds on the Janitor's bait.

Dark Six standing next to Six. 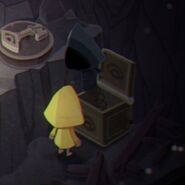 Dark Six as a jack-in-the-box in Very Little Nightmares.

The Glitching Remain of Six after she is taken by the Thin Man.

The Glitching Remain of Six guiding Mono through the Pale City's train station.

The Glitching Remain of Six looking at a poster of the Maw before Six is stricken with hunger in the secret post-credits ending. 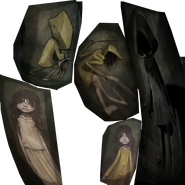 A distorted picture of Dark Six on the right.