None
The Dump Monster[1] is an unseen creature encountered in the dump from Very Little Nightmares. While its physical appearance is unknown, it gives away its presence by tossing various garbage and kicking up clouds of dust as it moves forward. It appeared in Level 10.

While trying to find a way out of the Nest, the Girl in the Yellow Raincoat walks through a chute and ends up in a Dump, where all of the garbage of the Nest and other miscellaneous debris (like parts of aircrafts) is stored. With the relative safety of this debris, the girl runs away from the Dump Monster, which pursues her throughout the location.

The Dump Monster will chase The Girl in the Yellow Raincoat moments after she leaves the safety of high ground and starts walking through the garbage. It differs from the Shoe Monster of the Maw as it is not as fast and will never catch up to the girl unless she stops moving. It is however more persistent and in one instance, when the girl climbs an overturned cart for safety, the Dump Monster will circle it endlessly like a shark, waiting for her to return. It is also capable of turning around immediately if it senses the girl behind it. If the Dump Monster does catch the girl, it will pull her under the garbage, presumably eating her. 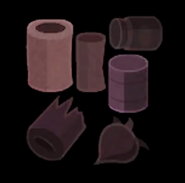 The model of the items that the Dump Monster throws around.