Immerse yourself in Little Nightmares, a dark whimsical tale that will confront you with your childhood fears! Help Six escape The Maw – a vast, mysterious vessel inhabited by corrupted souls looking for their next meal. As you progress on your journey, explore the most disturbing dollhouse offering a prison to escape from and a playground full of secrets to discover. Reconnect with your inner child to unleash your imagination and find the way out!

The game begins with the protagonist, a girl named Six, having a nightmare in which a masked woman approaches her, after which she wakes up in a large suitcase. The girl, with the help of her lighter, enters the Prison for children which is guarded by the long-armed Janitor. Gradually, she begins to experience hunger pangs. An unknown boy helps to satisfy Six's hunger by giving her a piece of bread.

The Janitor learns about the heroine’s escape, so he lures her into a cage with a piece of meat and carries her to the Lair. Having escaped, Six attracts the attention of the monster and evades it until it is driven into a room, blocking its path to the girl with an ajar door. It sticks its hands into it to get Six, but she breaks a cage holding the door open, which falls and severs the Janitor's arms.

Once in the the Kitchen, Six for the third time begins to starve. She eats a rat caught in mousetrap. On the way, she comes across twin chefs who immediately react aggressively toward her. The heroine hardly manages to escape to the Guest Area with the help of meat hooks.

Six meets the Guests who have sailed to the Maw to eat dishes prepared specially for them. The Guests start chasing Six as they notice her. As Six continues running through the dining area, the guests form a wave as they attempt to catch the heroine. Six narrowly escapes by swinging onto a lantern to a safe balcony. There, the girl begins to writhe again from hunger. A Nome offers her a sausage, but Six chooses to eat the unsuspecting creature instead.

Finally, once in the Lady's Quarters, the heroine meets the masked woman who appeared in her nightmare. Having taken the key to the door to the dressing room, Six draws the attention of the Lady of the Maw, who begins to chase after her, until the girl runs to an abandoned part of the palace. There, among the broken mirrors, she finds a small intact mirror, which Six uses to reflect rays of light onto the Lady, thereby weakening her. Feeling the hunger again, Six bites into the neck of the lady. The heroine gains the ability to absorb the souls of living beings, which she uses on the Guests, and walks out to the surface of the Maw.

Note: If the player hugs the Nomes during the game, they will watch Six coming out of the Maw.

Little Nightmares is a puzzle adventure game in which players play as a girl named Six, who must escape the ship called the Maw while avoiding huge and aggressive monsters. Despite the fact that due to the weakness and small stature of the heroine, they are not able to resist the enemies in any way, the Six is not limited in movements, so she can go in any direction, run, jump, push and climb various obstacles, take and throw objects, as well as use a lighter to light your path and light the lamps placed throughout the Maw. Thanks to all this, the heroine can hide or run away from opponents seeking to catch and destroy her. 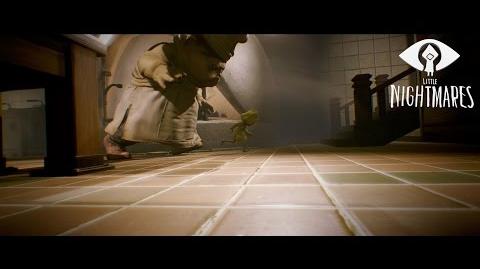 Concept art for a poster for the game.

Concept art for the game menu.