Throughout the franchise, music boxes have different shapes. They generally appear to have the shape of a cylinder, with a small crank on the top of it. Anyone who rotates the crank will play a music out of it. On the music box, there are several symbols marked with a notable eye symbol. It emits a purple-pink glow from the inside of it when smashed or broke. In the Residence, the music box near the Lady appears to have the shape of a circular platform with a crank on it. It has a miniature of the Lady on it that will spin once played. In Little Nightmares (the 2017 comic series), it has the form of a chest. Inside the chest is a statue replica of a ballerina that will rotate if the crank is turned. There's also a mirror in the music box.

A music box can be found inside the children playroom where Six has to run through before the electricity turns on. Once thrown, it will play a soundtrack theme known as "Prison Toys".

While Six is climbing a wardrobe in the Janitor's dollhouse in the Lair, a music box will drop from one of the drawers, alerting the Janitor.

A music box can be seen inside the Twin Chefs' bedroom in the Kitchen.

In the children's room, through which the Runaway Kid passes in The Depths chapter, on a pedestal against the wall, he can find and take a music box, which, like in Little Nightmares, will play a melody when interacting with it.

In the final chapter, The Residence, the Runaway Kid at some point passes through the room in which the Lady stands in front of her dolls and listens to music from a music box.

The first music box appears when Mono finds Six, kidnapped and locked in the basement by the Hunter. Six is seen turning the crank to the music box, listening to its tune, seemingly as a way to calm herself down a bit. After Six escapes from the room, Mono can interact with the music box.

Another and much larger music box appears in The Transmission chapter. When Mono finally finds Six in the Black Tower, he discovers that she has been transformed to a monstrous version of herself. Initially, Six is not hostile in this form and is very protective of the music box. Mono's goal is to destroy the music box in order to revert Six back to her normal form. After luring Six away from the music box, Mono takes a nearby mallet and whacks it, damaging the music box and enraging Six. Mono flees from Six and ends up in another room of the tower, once again finding Six and the music box. Mono will call to Six, causing her to go after him while briefly leaving the music box, allowing him to damage it with an axe that he finds. Each swing will transport Mono into a dark room, and he will need to find a door in order to escape. After enough hits, the music box is on the verge of breaking while Six is still trying to protect it. Mono hits the damaged music box several more times which causes Six to start reverting back to her normal form. Eventually, Mono succeeds in destroying the music box and Six is returned to normal.

When Six was in the Lair, she found a music box and listened to the tune. When the Janitor found her, she started to run. She later successfully escaped the Janitor. 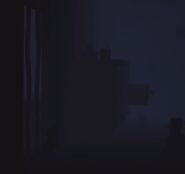 A music box in the playroom of the Prison. This music box will play the soundtrack Prison Toys if thrown. 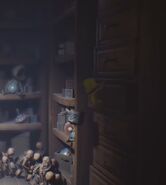 A music box falls from the cabinet, which alerts the Janitor. 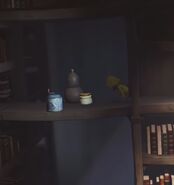 A music box seen on the shelves on the library. 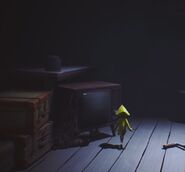 A music box seen atop of a television used to distract the Janitor.

A music box seen lying around in the Twin Chefs' bedroom.

The Runaway Kid passes a music box in the Prison's playroom. Just like in the main game, it'll play the soundtrack Prison Toys if thrown.

The Lady fascinated by dolls and a music box.

Six with her music box in the Hunter's shack.

Monster Six protects her music box with her remaining force.

The music box before the final hit.

Promotional artwork of Six with a music box.
Community content is available under CC-BY-SA unless otherwise noted.
Advertisement