None
Patients are the third minor enemies in Little Nightmares II. They are encountered in The Hospital chapter and are the main antagonistic faction of said chapter.

The Patients cannot live with their selves. They look in the mirror and hate what stares back. Seeing nothing but the flaws and ugliness of nature, they beg the Doctor to fix them, to work his magic, and make them whole again.

Patients appear to be an amalgamations of human remains and artificial mannequin parts. Just as any other residents, they are much larger and taller than the protagonists of the game, they vary greatly in appearance and size, from full bodied bandaged human heads and torsos with prosthetic limbs, to scuttling rotten hands. The larger Patients are three times the height of Mono and Six. Most of them appear to be wearing the same set of clothing.

Apart from the basic prosthetic hands and feet equipped by the majority of Patients, many Patients can additionally wield a variety of unique parts: grappler arm hooks, metal peg legs, and incomplete facial prosthetics. Some Patients lack a few prosthetics on their body, ranging from missing hands, arms, legs, to even their entire head. Few of them are completely limbless but still active. The Patients' prosthetics seem to be made of plastic or wood, with metal joints to link limb and facial sections in place.

The Playstation Blog sheds some light on the Patients' past. The Patients were actually people who came to the Doctor for "a medical solution to the boredom infecting their lives." The Doctor stitched various organic and porcelain body parts together, to create the Patients as we see them now.[1]

Although there are a lot of Patients seen throughout the Hospital, only a small percentage that are encountered by Mono are active.

After Six gives a boost for Mono to start a journey for the second fuse for the main elevator, a Patient will be seen blocking the bars. Mono has to distract it out of the way by turning the lights off. Not long after, he encounters more of them in a ward.

Later, several Patient arms burst through numerous cell doors in a corridor. Mono has to avoid these arms and keep moving forward. Afterward, some Patients with no legs break out of the doors and pursue Mono. Mono manages to escape them by climbing up a cabinet file, entering the vent above to arrive in a shower room.

In the shower room, Mono encounters a Patient sitting on a wheelchair, its weight making the chair immovable. Mono is able to get the Patient to move away by turning off the lights, luring it into the shower room. Mono turns the light back on to freeze the Patient. Before finally finding the second fuse, Mono is faced with a large dark room filled with countless Patients, about half of which become active. Mono eventually makes it to the other end of the room where a set of nailed wood boards barricade Mono from the hostile Patients, whom begin reaching at him through the gaps.

After taking the elevator down, numerous inactive Patients are found littering the morgue and being operated and checked on by The Doctor. A still-breathing Patient is seen when Mono and Six try to stay unseen by the Doctor while trying to obtain a fuse. However, Mono has to shut down its life support, distracting the Doctor.

Following the final encounter with the Doctor, Mono and Six at last escape the hospital through the waiting room, where the duo encounter numerous inactive Patients waiting around one final time.

Some Patients can chase Mono (and Six), but only in the dark. Mono can either direct the flashlight at them to freeze them, or lure them to an external light source or a dead end, allowing Mono to escape through narrow gaps. If they catch up with Mono, they will not hesitate to reach and grab him, which will result in a game over.

It may also be worth noting that some Patients can sprint while others walk more sluggishly. The latter moves at about the speed of Mono's run, have a harder time turning or maneuvering around obstacles and can even be dodged if they reach to grab Mono (though doing so is still highly difficult). Patients that sprint can be identified by being more hunched over when active while Patients that merely walk have a more straightened posture.

A Patient being frozen in place by the beam of Mono's flashlight.

Three Patients standing in a hallway.

A Patient chasing Mono as he is running to the bed.

A corridor full of Patients' arms.

A Patient on a wheelchair.

Patients in the dark.

Many Patients scrabble to try and reach Mono.

Several Patients being checked by the Doctor on their beds.

A Patient on a life support, still breathing.

Several Patients sitting down in the waiting room.

A painting of a typical Patient.

A painting of a Patient without legs.

A painting of a headless Patient's backside.

A painting of a legless Patient.

A painting of a limbless Patient.

A colored painting of a Patient. 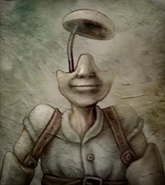 A painting of a Patient found in The Pale City.

Unused concepts of the Patients both in a waiting room and watching a television, and using crutches.

Concept art of the Patient with the upper half of the plastic face.

Concept art of the headless Patient.

Concept art of the Patient with legs instead of arms.

A headless Patient squirms on a hospital bed.

A concept art of what could possibly be the alternative design for the Patients and is known as "StrangeGuy" in the game's files.

A poster of various legless Patients.