Unknown
Rats are animals found throughout the Little Nightmares franchise.

Rats are small critters, about half the size of a Nome and have brown or grey fur.

There are several rats encountered in the Maw, mainly in the lower parts of the Maw.

Usually, Six encounters rats anytime throughout the game while exploring the Prison and the Lair.

After Six escapes the Janitor and enter the Kitchen, she is for the third time stricken with hunger pains. Six satisfies her hunger by devouring a helpless rat trapped in a mouse trap.

Throughout the Runaway Kid's journey in the Depths, he encounters some rats scattering around.

If he throws a wrapped head to a basket which may give the player an achievement, several rats will come out of the basket.

Although rats don't appear much in the game, Mono can see them in some secret places with Glitching Remains throughout the Wilderness, the School, and the Pale City.

After Mono dispatches a bear trap with a twig, he slides down a broken log. He later sees a giant rat with its head caught in a bear trap under the log.

While solving the puzzle of The Nome's Attic DLC, in a dark room near the entrance to it, you can see a cage in which a rat is sitting.

If the game is modded with free camera, the player can see some rats on the table which the Hunter used to tear an unknown animal inside the barn.

Mono later finds two dead rats hanging inside a locker with a Glitching Remain in it before entering the Teacher's classroom.

In a sewer system, Mono can see a rat standing on a pipe while descending down. Later, in a room with cages, some of the animals inside appear to be rats.

In the first issue of the comic series, a rat was encountered in a barn by the Refugee Boy and his sister. It was cooked and eaten.

In the fifth episode of the comic, Ghost finds an injured rat while fleeing with it from an apartment room with two Viewers watching a television. After the child reaches the window, the rat appears already dead due to blood loss.

One of the first rats seen that gets scared and runs into a sink.

Scared rat in the prison area.

Some rats are seen feasting on a meat inside a cage which will be eaten by Six.

Some hanging rats seen in the area where the Janitor captures Six.

A rat that was caught in a mouse trap.

A rat being eaten by Six.

A rat is seen beside a dead Nome in the Kitchen's freezer room.

A giant rat caught in a bear trap.

Two dead hanging rats inside a locker in the School.

A rat on the pipes while Mono is climbing down to the sewer.

Rats and moths in cages.

A rat that was found and cooked in a barn in the first issue.

A grey rat that was caught in a trap. 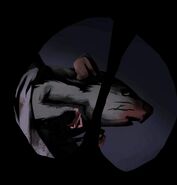 The rat succumbs to its wounds.
Français
Community content is available under CC-BY-SA unless otherwise noted.
Advertisement