None
The Refugee Boy[1] is one of the characters in Little Nightmares (comic series).

The Refugee Boy first appears at the very beginning. When he notices Six, he tries to drive her away, saying that "she does not belong here." However, when a leech nearly attacked Six, the Refugee still let her go to the campfire and offered to tell her about her past.

He later shared with Six the story of his arrival in the Maw. As it turned out, he lived in the village with his younger sister. But once the North Wind appeared in their village and destroyed it. The children manage to escape, and for some time they wandered like tramps until they found a barn in the middle of a field in which the children decided to rest. However, they were soon attacked by the North Wind. Taunting the Refugee Boy’s courage, he invited him to go out and look at what he had been keeping for a long time. The Refugee agreed and when he got out, the North Wind showed him his sister’s skeleton. As it turned out, his sister was killed a long ago, and the one who was with the Refugee turned out to be the Ferryman. Explicitly not wanting evil for the Refugee Boy, he takes his hand and takes him to the Maw, thus protecting the child from the North Wind. 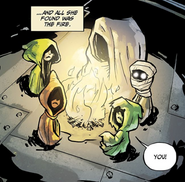 The Refugee Boy among others sitting around a bonfire.

The Boy and others running from the Leech.

A second shot of the Boy and others sitting around a fire.

The Boy and his Sister running from The Wind.

The Boy and his Sister being scared by a rat. 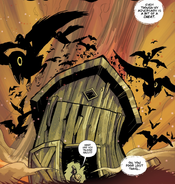 The Boy being surrounded by The Wind. 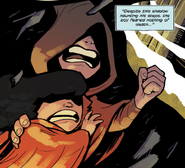 Him protecting his sister. 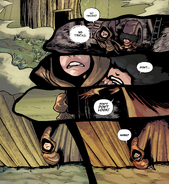 The Boy being shown his dead sister. 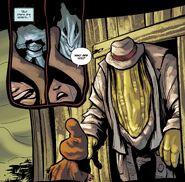 The Ferryman revealing himself to The Boy.

The Ferryman taking the boy and scaring away The North Wind.

The Boy showing his charm at the end of the comic. 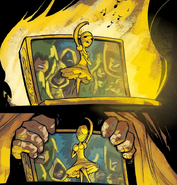 The Boy's reflection seen in a music box. His expression quickly changes when the Humpback Girl is about to break it.

The Boy shocked by the Humpback girl smashing the music box. 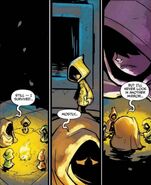 The Boy seen in the background at the end of the comic. 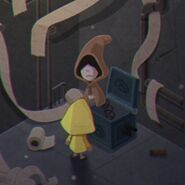 The Refugee Boy as a jack-in-the-box in Very Little Nightmares.