The statues are molded in the form of the Lady and made of porcelain. They are about the same height as Six's leg(s). The statues must be smashed to collect. When broken, black smoke and white sparks will fly out of it. Once the player collects and smash all ten of these statues, they will be rewarded a porcelain mask, very similar to the Lady's. They will also get the achievement "Rascal".

Statues are located in various places throughout the Maw. Sometimes they are hidden in secret rooms or you need to perform some specific action to get to them.

When Six ascends the first long staircase, there is a small depression, in which you can find the first statue.

The second statue can be found if you go up to the second floor in the prison area with an Eye and go left. There will be an open bedroom, in the corner of which there will be a statue.

The third statue is located in the Janitor's bedroom. In order to find it, you need to climb up some cabinets to the very top shelf on the left.

When Six falls underneath a loose floorboard, she must go to the end, finding herself under a room filled with wooden dolls, then move away from the camera and find the fourth statue.

The fifth statue is in a secret room hidden underneath the storage room filled with metal containers, the entrance to which is under a metal covering. Having passed through the opening on the floor, Six will enter a small room with paintings of the Lady, statue fragments, and the unbroken statue.

In the freezer room located above the meat grinder, you need to pass through a hole on the right wall and enter into another room, in which the sixth statue is located in the lower right corner.

After Six falls through a garbage chute, you should find the seventh statue in the bottom left corner.

The eighth statue is located in the Guest area on a chest of drawers opposite the toilet. However, it is only possible to get it once Six breaks a two-way mirror in the toilet and walks over some pipes, after which she jumps from them to where the statue is.

To find the ninth statue, after the scene with the thirteenth Nome and the sausage, you need to get into the room with the Lady's elevator and go to the left, where it stands behind the grate you enter through.

The tenth statue is in the Lady's room, which you can only get when Six manages to frighten the Lady away by smashing the pot on her bedside cabinet.

During the Nome's Attic puzzle, on top of some of the shelves, you can find fragments of statues.

After ziplining into an apartment window in the Pale City, simply leave out of the same window, walk away from the camera and enter into the next window. In the middle of the room should be a statue next to a Glitching Remain. Once broken, it will unlock an achievement named "Unladylike".

In the secret ending of the game, which can be unlocked by finding all the Glitching Remains, to the left of Dark Six lies a statue hidden by a shadow. 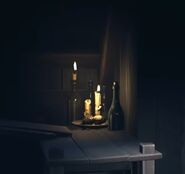 A broken statue seen in the Nome's Attic.

Mono holding a statue that is in an apartment of the Pale City. 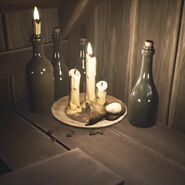