Little Nightmares Wiki
Register
Don't have an account?
Sign In
Advertisement
in: Articles with a placeholder name, Comics (2021), Characters,
and 6 more
English

None
The Tall Figure[1] is an antagonist in Episode 6 of Little Nightmares Comics.

The Tall Figure's appearance bears a similarity to the Thin Man's, but bulkier and less stiff. While kidnapping one of the Black children, he appears to have a dark skin tone.

The top of his body, which only appears in the comic's code, appears to have a face similar to that of the Thin Man and has what appears to be a dunce cap on the top of his head.

The sprinklers turn on and douse the fires. That's when a hand reached down and began pulling some of the children into the dark ceiling.

Mono quickly escaped into another room then sees a broken television to take cover. The footsteps get louder and louder until the figure stood right in front of Mono, who was staring on. The screen slowly faded to black, but not before a crackling sound.

The Tall Figure grabbing one of the children.

The Tall Figure's hand taking a child into the ceiling. 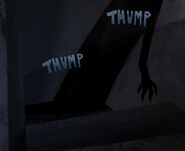 The Tall Figure walking up the stairs.

The Tall Figure's final appearance before the screen fades to black.