None
The Barber[1] was an unused character for Little Nightmares II. He is armed with a large pair of scissors.

The Barber appears to be a giant humanoid creature with wrinkly pale skin, dark hair that curls on either side of his head, and a mouth that is always open.

While he is never physically seen, two portraits of him are hung in the Residence. The first can be found in a room with a wall covered in paintings, where he is in a portrait wearing an attire similar to the Teacher's. In the next room, he can be seen in a portrait where he is wearing a red button-up and a green tie.

While he was cut from the game, his existence is still alluded to in the game. There is a portrait identical to that of the one found in Secrets of the Maw that can be seen down the corridor in the first part of the School. It appears to have fallen off the wall due to a large hole where it was hanging from, likely the doing of the Bullies.

He can also be seen in a newspaper, using his large scissors to intimidate a child. 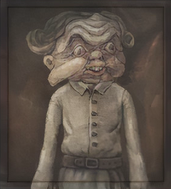 A painting of the Barber found in the Residence. 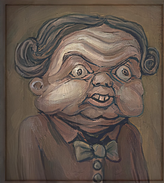 A portrait of the Barber from Secrets of the Maw and Little Nightmares II.

A Newspaper featuring the Barber from Little Nightmares II. 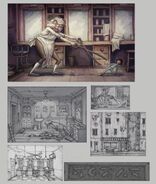 Concept art of the Barber, which some are not included in the artbook.