Unknown
The Butler is the second inhabitant/antagonist of the Nest in Very Little Nightmares. He appears in Levels 6, 12, 13, 15, and 17.

His head is always bowed to his Mistress, but his patience for grubby little creatures who dare to skitter across his path is… lacking.

The Butler is a tall slender humanoid but is constantly hunched over with his arms locked behind his back by cuffs. He wears a dark grey tuxedo with matching shoes. He does not appear to have any deformity but his eyes are constantly closed and has a permanent smile on his face. His ears and nose are pointed while his scalp is balding with a few strands of hair remaining. As he has telekinetic powers, he is constantly shown levitating above the ground.

The Butler is a very dangerous enemy as his telekinetic powers allow him to kill the Girl in the Yellow Raincoat without having to make physical contact with her. He can see and hear just fine so revealing your location to him will cause him to throw various objects at high speed towards the raincoat girl, killing her instantly.

The Butler is shown to be reckless as he will not hesitate to throw valuable artifacts or appliances to kill the girl. He is also persistent as he will chase down both Six and the Girl in the Yellow Raincoat through the garden in the game's finale.

The Butler is first seen shortly after the Girl in the Yellow Raincoat escapes from a box in the elevator. The girl watches from atop a wood plank, high enough so as not to be spotted by the Butler, who eerily floats through the corridor before demonstrating his telekinesis by opening a door using only his mind.

The Butler is not seen for some time until after completing a coat hanger puzzle, where he appears ironing clothes. The girl is able to cause a distraction by burning some clothes with a spare iron and sneaks past the Butler into a laundry room. Here the girl turns on a washing machine which alerts the Butler to it. The girl quickly hides inside a laundry box and sneaks back into the ironing room to retrieve a key while the Butler is preoccupied with the laundry. Later, in a different laundry room, the Girl in the Yellow Raincoat has to hide inside open washing machines to stealth past the Butler who is still managing laundry.

Some time later, the girl finds an escape chute at the end of a set of boiler rooms. She's able to open it but the sound alerts the Butler once more. However, using a pipe system, she's able to blast hot steam onto the Butler which stuns him long enough for her to escape. The irritated Butler then drops a heavy box down the chute with her, in the hopes of crushing her with it. However, this box is not seen in the following shot as the Girl lands safely in a pile of web sacks.

Later, while walking on the boards, the Girl in the Yellow Raincoat looks at the Butler taking a doll with a familiar clothes into the dining room. Some time later, the Girl in the Yellow Raincoat finds a long room filled with seated dolls facing an active television, which the girl switches off. Seconds later, the Butler enters and investigates the room and switches the television back on. The girl sits down in an empty chair and blends with the dolls, which successfully tricks the Butler who leaves the room with the door open, allowing the girl to progress.

The Butler's last encounter has him ambushing the girl as she makes for the mansion's exit. The girl dodges his attempt to smash her with a chandelier and a long chase ensues. Both the Girl in the Yellow Raincoat and Six have to work together to bypass various gates and obstacles while avoiding the Butler's many attempts to crush and impede them with falling objects. The Girl is finally able to barricade against the Butler inside a shed, with Six still outside, and escapes through a hatch. It is unknown how Six evaded the Butler after this.

The Butler is encountered for the first time.

The Butler working on the ironing. 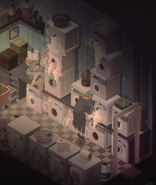 The Butler putting away clothes into washing machines.

The Butler being sprayed with steam.

A doll from the play area made to look like the Butler. 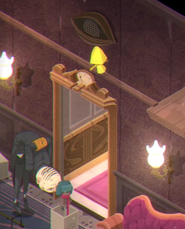 The Butler unpacking a new doll. 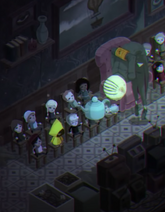 The Butler coming to check on the television room.

The Butler dropping a chandelier and beginning a chase.

The Butler during the chase. 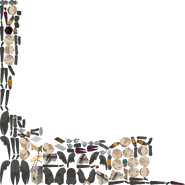 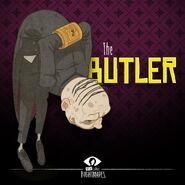