None
The Craftsman is the first inhabitant/antagonist of the Nest in Very Little Nightmares, and one of the few individuals that pursue the Girl in the Yellow Raincoat. He appears in level 2 to 5.

I know we said you should try to make new friends in the Nest, but maybe… Maybe not this guy.

The Craftsman appears as an old man bound to a small purple wheelchair. He has long white hair, long arms and legs (though not as long as the Janitor's), and fingers with long black fingernails. His long legs appear to be non-functional and his feet are pointed down with his toes curled and are also twisted backwards. He appears to wear a surgical mask and red goggles, as well as a fully green outfit and a tan apron.

The Craftsman is encountered early on in the game, seen dragging a cage through a doorway. Later he can be seen cleaning clothes, the size of which would fit children the same height as Six, in a shower room and later in another room filled with bathtubs. He can also be seen searching for The Girl in the Yellow Raincoat in an adjacent room where wigs are made. He is last seen taking boxes, in one of which The Girl in the Yellow Raincoat hid herself, to an elevator.

The Craftsman can reach high shelves thanks to his long arms but is restricted to his wheel chair so cannot see anything that is too high up. Though he is capable of dragging himself around with his arms (or sometimes just one arm), he cannot bypass obstacles that obstruct his wheel chair and will be forced to make detours if caught in a dead end. If he can reach The Girl in the Yellow Raincoat while she's at ground level, he will run her over with his wheelchair, killing her.

The Craftsman alerted after the girl breaks a jar to retrieve the key.

The Craftsman grabs the girl by the throat.

The Craftsman trying to reach the girl. 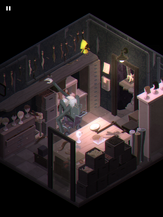 The Craftsman reaching for the young child.

The Craftsman taking a box to the elevator.
Add a photo to this gallery

The Craftsman as he appears in the Very Little Nightmares teaser.
Add a photo to this gallery 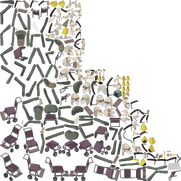 The Craftsman's model set.
Add a photo to this gallery
Retrieved from "https://littlenightmares.fandom.com/wiki/The_Craftsman?oldid=17306"
Community content is available under CC-BY-SA unless otherwise noted.