Tobias Lilja or Christian Vasselbring
The Doctor is the third antagonist from the game, Little Nightmares II. He is the main antagonist of The Hospital chapter.

Perfection is important to The Doctor and he will not allow anything to interfere with his life's work. With his adoring patients clattering the halls, you may not hear The Doctor coming, not until it's too late. Only then will you learn to look up to him.

The Doctor's size is much bizarre than the previous antagonists Mono and Six have encountered. His physical features look akin to a bloated cadaver, with huge teeth visibly poking out from a swollen pair of gums and pale, distended flesh that appears to have been inflated. It also seems that since he has been on the ceilings for too long, his skin was dragged down by gravity. He seems to be middle-aged, as his hairline is receding and he has many wrinkles on his forehead and fingers; consequently, his eyes are receded into his sockets and look upon his prey upside-down. He is adorned in a dirty buttoned overcoat with black trousers and matching black shoes.

Like the other characters in the franchise, the Doctor does not talk and his personality is shown through his actions. He is shown to be involved and orderly in his work, taking his role as a doctor very seriously. According to the description of the site, it is said that the Doctor is a perfectionist and that is why he will become aggressive if he feels that all of his efforts to treat his Patients are threatened.

It is also shown that he takes care of his Patients and is keen to care for them and keep them alive, as evidenced by the Patient hidden behind a curtain that he tries to save him by all means. Additionally, the Doctor appears to stay hygienic, as he washes his hands after doing his activity (although the water tap is shown to be not connected to any water source). The Doctor also giggles occasionally while performing his duties.

The Doctor operates on willing Patients who came to him out of boredom[1]. He replaced their fleshy parts with artificial porcelain. Even if the results weren't what they expected, the Patients would be unable to voice their complaints. To this day, the Doctor still continues to operate, getting rid of old parts and adding new ones as he moves throughout the Hospital on the ceiling.

Despite his weight and size, the Doctor can crawl up the ceiling, using it in his attempts to catch up with Mono and Six. He usually stays on the ceiling but is capable of coming down. The Doctor is also able to lift obstacles which Mono uses to hide (for example, tables), allowing the Doctor to catch Mono easily.

The Doctor appears in the third episode of Little Nightmares Comics, when he watches the girl with braids locked in a hospital room as she begins to dig the floor to make a tunnel with spoons (which, most likely, it was he who gave her).

After a while, the Doctor opens the cell door and frees the already desperate girl, and then attacks her as she tries to get out of the Hospital.

Mono and Six first encounter the Doctor in a room next to the room with hung masks. The duo sneak past him when he is working with a patient, apparently trying out different heads for it. In the next room, the Doctor goes to the ward to examine several Patients. Mono and Six sneak under the beds of the Patients in order to avoid his gaze and reach one of the objects in the room that they can use to throw at a button to open a gate. After throwing the object at the switch, Mono and Six open the gate, alerting the Doctor. The duo quickly hide under a bed next to the gate as the Doctor approaches and looks around in confusion. He then leaves the room through a tunnel on top of a damaged shelf. While Mono and Six sneak through the ceiling, they see removed ceiling panels all around, showing the Doctor underneath as he crawls around the ceiling below them.

Later, Mono and Six encounter the Doctor once again in the morgue of the Hospital. While the Doctor is busy, Mono sneaks into the next room with the help of Six and deactivates the life support connected to an unconscious Patient. The Doctor hears the monitor of the struggling patient flatline and is left distracted momentarily as he checks the patient and reactivates the machinery. Meanwhile, Mono grabs a fuse on a cell, and uses it to open another gate. When they open the door, the Doctor becomes aware of their presence and a chase ensues. The Doctor relentlessly pursues the duo and chase leads to a crematory machine, where the Doctor corners Mono inside. Fortunately, Mono escapes through the vent of the machine and Six closes the furnace door, trapping the Doctor inside. Mono can either turn the crematory machine on, burning the Doctor alive as he screams and bangs on the door, or spare him by leaving him trapped inside. 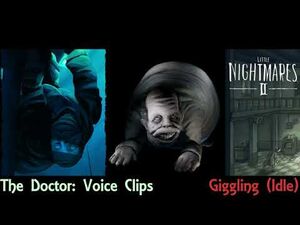 The Doctor looking down while hanging between two shelves.

The Doctor with a Patient on an operating table.

The Doctor checking several Patients on their beds.

The Doctor chases Mono as he attempts to climb some drawers.

The Doctor searching the room after being alerted.

The Doctor appears to travel on the ceiling using this method.

The Doctor washing his hand.

The Doctor trying to save a Patient.

The Doctor chases Mono, as he dodges falling metal shelves.

The Doctor trying to crush Mono with hospital beds.

The Doctor searching for Mono inside a furnace before being trapped.

The Doctor stalking the girl with braids.

The Doctors portrait, as seen in the Residence.

A photo of the Doctor performing a surgery in front of a crowd that can be found in the Hospital.

A photo of the Doctor.

A handful of drawings, some depicting the Doctor.

A photo of the Doctor.

Early concept of the Doctor shows that his face would have been much more loose.

Concept Art of the Doctor crawling on a tower of hospital furniture.

Concept Art of the Doctor crawling down a pile.

More concepts for the Doctor, some involving him standing on two feet (which made it to the final version via a painting).

Concept where the Doctor was decapitated.