Tobias Lilja or Christian Vasselbring
The Hunter is the first antagonist from the game Little Nightmares II. He is the main antagonist of The Wilderness chapter.

The Hunter seems to work alone, stalking the wilderness with a rusty shotgun and a lantern-style flashlight. His motives are unknown, but he does appear to have an interest in taxidermy.

Armed with his flashlight and battered shotgun, The Hunter stamps through the wilderness with cold ambition, sniffing out his prey, collecting new trophies for the groaning walls of his shack.

The Hunter is a large, humanoid monster with a somewhat stocky physique and a massive head covered by a burlap sack tied around his neck with twine, with a single eyehole where his right eye would be, topped with a brown Gatsby cap. The rest of the Hunter's outfit consists of a green overcoat, brown trousers, brown gloves, and black leather work boots. His coat is noticeably worn and crudely stitched together, with the seam of his right shoulder being the most threadbare, revealing a white cotton-like substance bulging out from between the stitches. This may either be the insulation of the Hunter's jacket, or an implication that the Hunter himself is filled with stuffing, similar to the rest of the taxidermy in his home. The Hunter also has heavy breathing, as seen when being idle.

Like the other characters in the franchise, the Hunter does not talk and his personality is shown through his actions. He is shown to be possibly unhealthy and is rather aggressive while he performs taxidermy. It is evidenced that when the Hunter sets his mind to something, he doesn't back down, as when Mono and Six escape his cabin and evade him several times, he continues to venture deeper into the woods in pursuit of them.

It can also be said that the Hunter is somewhat of a slob, given the state of his cabin, which is a total mess with the many things lying out and about. Despite all this, he is also shown to be patient and doesn't kill and taxidermy his prey immediately, as shown in the Little Nightmares Comics, where he chases after and, eventually, captures Six, locking her in his basement for at least a month, as evidenced by the tally marks on the walls. It can be argued that he could have been hoping for Six to die of dehydration or starvation.

In the first episode of the Little Nightmares Comics, the Hunter tries to catch Six, who was hiding from him in the Wilderness. After finding cover, she attempts to elude him by throwing a pebble in a different direction. This proves successful as the Hunter turns and fires his shotgun in the direction the pebble caused noise, which grants Six enough time to duck into a small tunnel under a tree and make a quick escape. Unfortunately, the Hunter finds Six again when she is distracted by Mono, and this time cornered her.

While exploring the Wilderness, Mono encounters numerous traps, some filled with people. Mono soon learns that the traps are belonged to the Hunter, who has an abnormal passion for taxidermy; a passion which the Hunter fulfills by trapping people, stuffing them, and then posing them in his house.

Mono eventually makes his way to the Hunter's house, where he frees Six from the basement. Together, they make their way into a shed, where the Hunter is skinning an animal he has killed. They quietly tread behind him and manage to escape through a small door where organs are dumped out of, but the noise they made draw the Hunter's attention. The Hunter grabs his shotgun and lantern and sets off in pursuit of them. Despite the Hunter's aim and rapid fire, the duo is able to dodge and shield themselves as they run. They eventually lose him by hiding under a small cliff, but instead of giving up the hunt and returning home, the Hunter travels ahead, hoping to find the children and kill them.

After some time, the Hunter finds the children near an abandoned barn and resumes his pursuit, but fails to kill them as Mono enters the building. Mono breaks a floorboard on the second story, which alerts the Hunter and causes him to fire at the duo from the ground floor. The Hunter follows them through the barn and along the adjacent dock, whilst the children sneak and dive through the swampy waters.

Further ahead, a couple of birds alert the Hunter to the children's presence yet again, where he promptly corners the kids in a small shack. Mono and Six retrieve a spare shotgun from the shack's wall. They both aim it at the Hunter, and the second the Hunter breaks through, they shoot him, killing him instantly and sending his body flying into the Wilderness.

The Hunter carries a double-barreled shotgun to shoot and a lantern to spot victims. He will run after Mono and Six, but more often the Hunter will aim and shoot at them, killing them if they stay out in the open for too long unless the player dodges it which is tricky and tough or if the player hides behind indestructible objects (for example, the logs in the swamp). The player can hide behind various objects, which will shatter when hit with a blast from the Hunter's shotgun. There will also be times when Mono and Six will have to evade the Hunter through timed stealth.

If Mono gets too close to the Hunter, he will bludgeon him in the back of the head with the butt of his shotgun. 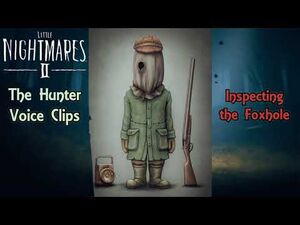 The Hunter skinning an animal.

Mono and Six fleeing from the Hunter.

The Hunter searches for Mono and Six.

The Hunter examines the trees with his lantern.

The Hunter shining his light onto Mono and Six.

The Hunter shooting down a hanging television.

The Hunter breaking into an abandoned building before shooting Mono and Six.

The Hunter searches for Mono and Six in a swamp.

The Hunter patrolling the waters.

Mono and Six hiding from the Hunter behind a fallen log.

The Hunter receives a taste of his own medicine after cornering Mono and Six. 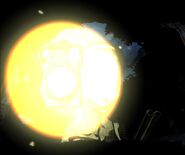 The Hunter looking for Six. 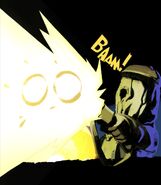 The Hunter fires his gun.

Concept art of the Hunter in a watch tower and of him getting shot after getting stuck in a bear trap.

The Hunter's profile from the Little Nightmares Twitter page.

The Hunter tearing an animal in the pre-launch trailer.

The Hunter searching in the woods.

Close up of the Hunter's face in the announcement trailer.

The Hunter as depicted on the right of the box art.

A poster of the Hunter's models.

The Hunter with his unloaded shotgun and a bear trap.

A teaser for the Hunter.

Diorama of Six and Mono about to shoot the Hunter.