None
The Hunter's victims[1] are people who have fallen dead to the hands of the Hunter. Some of them are either rotten corpses found throughout the Wilderness or effigies that are stuffed and placed around the cabin by the Hunter. This page will only document the humanoids, and not his animal victims.

The victims have casual attires. A younger-looking victim has stuffing drooping out of his right eye socket. The man on the left appears to be balding, missing his lower jaw and his head supported by what looks to be a thin rod leading from his body. The lady on the right appears to have a giant scar stuffed with stuffing, sewed down in the middle of her face; an old lady upstairs to be a non-distorted Viewer-like person.

While Mono is traveling through The Wilderness, he will first pass a sack hung up in the tree with limbs hanging out of it. The bodies are being swarmed by flies.

Later, after crawling through a cave, one can be found buried with a shovel on top of them with a Glitching Remain standing over them.

After entering the cabin, Mono will find a table with three stuffed humanoids made to look like they were eating dinner.

In the attic, Mono will come across many sacks with what can be assumed to be bodies inside. In addition, there is an old lady holding onto a lever, and Mono will need to pull her arm off in order to retrieve it.

A bag filled with corpses.

A group of taxidermied people in the Hunter's dining room.

The girl with a sou'wester. 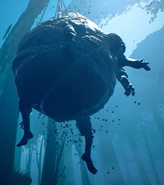 The bag with corpses up-close. 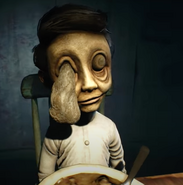 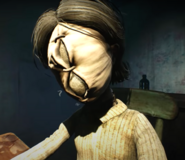 Concept art that features some victims that have fallen into the Hunter's traps.

Concept art of the stuffed family.

A screenshot of the stuffed kids in an early version of The Wilderness chapter.

A screenshot of a taxidermied woman upstairs in the early version of The Wilderness chapter.