The Kitchen is the third area Six passes through in Little Nightmares, and is home to the Twin Chefs.

Six's main goal here is to escape the Kitchen while avoiding the Twin Chefs.

There are multiples areas in this one location, such as the pantry and the bedroom (see slideshow for the most important areas).

Following her battle with the Janitor, Six wakes up in the ventilation. After climbing a ladder she finds herself in an area where hooks are seen carrying meat parcels. To continue, Six must grab one of the hooks which is easier to accomplish by jumping from a parcel lying on the ground to the right. After crossing a chasm, Six will be forced to let go of the hook and fall onto a massive pile of parcels. Shortly after, she feels attacks of hunger for the third time. She will need to eat a rat caught in a mousetrap in a nearby room filled with laundry baskets. Once she has fed, she can climb those baskets to reach a window into the next room where more baskets are waiting. To continue, she will have to climb some more baskets and push a lid to the right to create a makeshift ramp.

Climbing some bloody stairs and passing through some swinging traffic doors will bring Six to one more room filled with laundry carts. The smallest one can be pushed closer to the window leading to the pantry. Next to it is a corridor, and Six can safely enter the cooking area by crawling through a small doorway leading under some counters where lies a massive fish head. Entering this room will reveal the first of the Twin Chefs cutting some steaks. He will walk back and forth between the cutting board and a boiling pot in which he will toss sausages. Once he resumes cutting meat, Six should sneak past and hide underneath some shelves just before the doorway. This will trigger the chef to walk down to the next room and tend to multiple overs. Six must sneak down the steps and make her way to the stairs across the room while the chef has his back turned. She must be cautious if she finds herself underneath the table with the fish pieces as the chef will spot her underneath it and even reach down to grab her.

Once she made it across the room and up the stairs, Six's path will be blocked by a large metal door closed with a padlock. She must quickly climb some shelves to get out of the chef's reach. From there she can leap onto the wooden beams overhead, and slowly make her way back to the left side of the room. There she will find cages and baskets filled with small fish, which she can climb to reach a vent leading to a double-toilet washroom. Crossing another corridor to left will bring Six to the bedroom where the second chef is sleeping on the bed.

The key to the padlock is hanging across the room, but an attempt to reach it will wake the chef. The safest way to grab it is to have Six climb the tall drawers across the room, which will wake the chef but also keep her out of sight. Once the chef has left the room to head for another room in the corridor, Six can climb back down and jump for the ledge. She can then hang onto the key and swing herself to dislodge it from its peg and drop it to the floor. Next she can bring the key to the elevator located in the corridor, which must be summoned by jumping onto and pulling down the switch. Once Six enters the elevator (with the key), the pressure sensor will cause it to automatically descend back to the corridor below connecting the pantry to the cooking area.

Taking the key, Six must make her way back to the door but it would be wise to first peek into the next room to make sure the coast is clear. The Chef will wander around the kitchen but will always remain in the general area where Six is located. Once she manages to unlock the padlock, Six can push open the door to the next room and climb the counter with the cleaver to reach a window. Entering it will bring her to another room with a meat grinder, into which she must throw pieces of meat to create a rope made of sausages.

To the left of the grinder is a miniature elevator that will bring Six to a freezer. Once piece of meat is already lying on the trap door. Another one is on the counter to the left of the miniature elevator. To reach the third piece, Six must climb some shelves and grab onto an empty hook above, swing herself forward and grab onto the meat hanging on another hook. The meat will fall off the hook and Six can drag or push all of them onto the trapdoor. She must then use the miniature elevator to return to the meat grinder, grab onto the lever to release all the meat into the machine, and work the crank until a three sausage long rope is made. Six can grab onto the sausage and swing herself to reach the small vent to the right that leads to a second freezer.

Six's path will once more be blocked by a metal door locked by a padlock. Pulling the switch in the corridor will bring down the elevator with the second chef inside. Before the gate opens, Six must run back into the freezer and hide inside the wooden box. The chef will grab cheese from the box and then proceed to inspect the meat hanging above. While he's distracted, Six can make her make to the elevator, but the chef will be immediately alerted once it rises. Six must immediately exit the elevator and jump into a vent located to the right. The chef will quickly give up his pursuit and unlock the second cutting area where he will start hacking at a peculiar piece of meat. As he's working, Six must sneak behind him while hiding under the wooden counters and make her way to small opening in the wall. This will bring her to an electric grinder which she can turn on with the push of a button. Immediately after she must run back through the small opening as the chef will walk up the stairs to investigate the noise. While he's distracted, Six can quickly hop onto the table and grab the key and run for the elevator to return to the metal door below. This will once again alert the chef, but as long as Six quickly unlocks the padlock she can run inside the room and hide in a metal box. The chef will once more lose interest and walk through the door to the dish area.

Once the chef has left, Six can jump to grab the metal hatch and climb inside to make her way down the garbage chute. To the right is a ladder which she can climb to make her way into some drains leading to the dish area where both chefs are now cleaning dinner plates. The second and fourth drains do not have protective grids so Six can use either one to reach the floor of the dish area. Six should use the second drain and hide under the sink with the toilet plunger located close to it. This will trigger both chefs to leave the sink in the center of the room and starting working on opposite ends with their backs turned. While they're distracted, Six can sneak underneath the center sink, and continue to the next one to the right (near the shards of broken plates, which must not be stepped on as this will alert the chefs). In an adjacent room, she must climb the counter and pull the switch which will reverse the movement of the hooks below. This will alert the chefs so she must quickly jump down and hide under the counter to the left.

Once the chefs lose interest, Six can sneak back across the room. There are now two ways to reach the hooks above. One way is for Six to jump down the fourth drain, walk back to the second drain, exit it and climb the stacks of pots and plates on the shelves near the door and jump onto the wooden ledge where she can easily grab onto a hook. The other way is to just make her way straight to the center sink and climb the stack of plates above which the hooks pass, though there is a higher risk of being spotted by the chefs. Either way, the chefs will notice Six hanging onto the hooks and will quickly make their way into the next room to try and catch her.

The first chef will be waiting by carts filled with plates so Six must let go of the hook before she comes within his arms reach. Doing so will cause the second chef to break through the door and give chase, so she must run and slide underneath the table to evade his grasp.

Six must keep running for the boxes which she can climb like stairs to reach more hooks. Grabbing onto one will bring her to the Guest Area, leaving the chefs behind in frustration.

The pantry area seen in the Lair's survey room.

The Bedroom as seen in the demo. 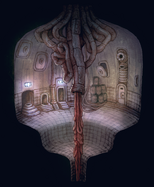