The Maw is the main location in Little Nightmares where all gameplay takes place. It is described as a kind of underwater resort that caters to the extremely wealthy and powerful elite. It is never explained how or when the Maw was built or who built it.

The Maw is divided into seven main areas:

The Maw functions just like a metal-plated ocean liner but is designed vertically like a skyscraper. Due to this design, it floats like an iceberg where only its funnel breaks the ocean surface while the greater bulk lies underwater. However, when passengers need to climb aboard, it can raise itself out of the water further to expose its shell-like entrance. That being said, the Maw is partially submersible, and it can also anchor itself. When the Maw is submerged, its appearance is a small rock formation with a door, and at the top is a chimney that bellows black smoke.

Like an actual ship, the Maw tends to heel gently in the waves, enough to cause some objects to roll across rooms. It also has watertight doors in the lower areas to prevent its compartments from flooding in the event of a breach. In the trailer, there are also portholes that allow that on-board to see outside. As seen in The Hideaway DLC, the Maw is steam-powered and has great engines that burn coal to provide power. It does not seem to propel itself with propellers but by the propulsion of black smoke as seen in its concept art. Any smoke not used for propulsion escapes the Maw through the single funnel located at its peak. Trailing behind the Maw are giant fishing nets used to catch the large aquatic creatures seen in the Kitchen. The Maw also has electric generators to power the various light sources and elevators found throughout the areas.

It is interesting to note that despite its primary inhabitants being giant compared to Six, there are many areas throughout the Maw that are built or easily accessible to small creatures. This includes padlocks installed on doors close to the floor and miniature ladders.

The first four areas are separated by vast chasms, giving the illusion that there is a large city within the Maw, and are connected by rails with traveling hooks that carry bags between areas. An elevator directly connects the Guest Area and the Lady's Quarters, the latter of which is directly above the other and is overlooked with a balcony.

The top of the Maw seen above the sea.

A book about the Maw in the playroom of the Nest.

Dark Six looking at a poster for the Maw.

A colored photo of the Maw found in Little Nightmares.

A portrait of the top of the Maw.

A portrait of the Maw's exit.

A portrait of the scrapped version of the Maw's interior.

A small painting of a hallway in the Residence.

An advertisement poster of the Maw in Little Nightmares II.

A photo of the Maw in Little Nightmares II.

Chalk art done by a Bully, one of which depicts the Maw. 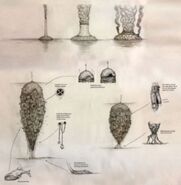 Some original concepts of The Maw.

The first concept art, that was first presented in 2014.

The second concept art, that was first presented in 2014.

Another concept art of The Maw.

Underwater view of the Maw as seen in the trailer.
Français Русский
Community content is available under CC-BY-SA unless otherwise noted.
Advertisement