Christian Vasselbring[2]
The Teacher is the second antagonist from the game Little Nightmares II. She is the main antagonist of The School chapter.

An educator with an unusual ability to detect troublemakers. Her class is full of well - behaved children.

Misbehavior will not be tolerated in The Teacher's classroom, and nothing escapes her cold, twisted gaze. In her domain, children should be seen and not heard, and if one should be heard, they will never be seen again.

The Teacher is an elderly, slim woman who dresses similar to school teachers from the 1910s, with a gray skirt, a beige buttoned-up shirt, white socks, and black Mary Janes. The Teacher is a relatively large monster, with a height of about four times that of Mono and Six's. Her head is massive compared to the rest of her body, with baggy eyes, graying black hair, and a wrinkled mouth stuck in a permanent smug grin. Her most striking trait, however, is her neck- when she spots troublemakers from afar, The Teacher can stretch her neck by several meters, able to bend and flex it like a snake to move around obstacles and reach faraway targets. The Teacher also appears to have a very strong skull that it can bend down metals, as demonstrated when she chases Mono in the vents.

Like the other characters in the franchise, the Teacher does not talk and her personality is shown through her actions. The sadistic Teacher, as her alias implies, loves inflicting fear in her underlings and imposing that she demands constant obedience. She is extremely faithful to her work, teaching the class of Bullies (despite them apparently neither learning nor caring about what she teaches), punishing anyone who disturbs the environment of the School, and preparing biology presentations. The Teacher seems to be well aware that her presence unnerves children and acts in a deliberately unsettling way to put them on edge, as seen with the Fat Kid. The Teacher is perceptive and can not be fooled for long, as shown in the rafters scene and with the capture of the Fat Kid.

When she is truly idle, however, aspects of the Teacher seem almost human. She appears to be quite lazy, taking heavy, lumbering steps and quickly assuming that a noise was a coincidence, even if it is clearly not the case. She also slightly bobs her head left and right when she walks. In the last scene of the Teacher, she is shown to have a passion for piano music, playing the piano beautifully and even twisting her neck to a particular note.

The Teacher has the uncanny ability to extend her neck to great lengths to look at areas out of her reach. If Mono makes a noise, the Teacher will be instantly alerted and investigate the area where the noise came from or from what caused it. The Teacher does not seem to have good vision as Mono can easily hide from her in open dark crates. If Mono were to be spotted by the Teacher with Bullies in the area, she'll command Bullies to attack him. She can also use her neck to lunge at Mono if he is ever seen and out of reach. If she gets close enough, she will grab Mono with her mouth and proceed to take him back to her body. She can also grab Mono with her hand if he is too close.

The Teacher appears in the fourth episode of Little Nightmares Comics, noticing and starting to chase the Fat Kid, who had previously managed to deal with several Bullies. The boy tries to hide from her in one of the school lockers, but the Teacher quickly finds him and opens the locker door. The further fate of the child remains unknown.

Once Mono and Six find a hole in the wall that was hidden by a painting, ironically of the Teacher herself, they find themselves going through some vents. The children will then soon find the silhouette of the Teacher retracting her neck before the door closes.

After escaping a locker pushed on top of him and with Six being taken hostage by a group of Bullies, Mono encounters the Teacher in a classroom he must pass by to get a key to the elevator, where she is teaching the Bullies at their desk. She will turn to look at the chalkboard as she writes things down from her notebook, then she will look back at to turn the pages, forcing the protagonist to sneak behind the desks when she isn't looking. After getting to the next room, Mono indirectly causes a bookshelf to fall over while trying to get the key, causing the Teacher to search the area by extending her neck. After surveying the room, she returns to her classroom and begins disciplining the Bullies. Mono escapes the classroom and goes into the elevator.

After passing the room with dunce caps and traversing through the vents, Mono will encounter the Teacher smacking something with her ruler. As he exits the vents, Mono accidentally knocks some glass bottles down from above due to the loosened wooden board, alerting the Teacher. The Teacher will search for Mono by extending her neck. After Mono climbs up some sheet rope, he has to push a wooden board to cross the gap, alerting the Teacher once again. Mono will escape and enter the library, where the Teacher proceeds to enter. While traversing the library, Mono knocks down some book which alerts the Teacher. She extends her neck, bursting through a bookshelf and chases Mono before he escapes under another bookshelf. Soon after, Mono starts climbing some large columns of books and knocks down some more books, causing the Teacher to extend her neck and look for him. Fortunately, Mono is able to avoid her gaze. The Teacher proceeds to exit the library.

Mono encounters the Teacher again in what appears to be a science lab area of the School. The Teacher is seen working in the lab, as Mono sneaks under tables and behind jars to avoid her gaze.

Mono does not meet the Teacher again until after he rescues Six from the Bullies. Mono and Six find the Teacher playing piano and writing down what she plays. While the Teacher is playing, Mono lowers down a platform above and meets up with Six to open a vent. However, the Teacher becomes aware of the duos presence and chases them by extending her neck and pushing her head through the narrow ventilation. Mono and Six are able to escape, landing in a dumpster, out of the Teacher's line of sight. She leaves after she is unable to find the duo. 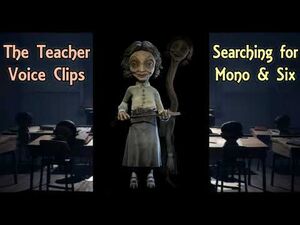 The Teacher seen for the first time. However, it's only her silhouette.

The Teacher searching a room by extending her neck.

The Teacher in her classroom, disciplining one of the Bullies.

The Teacher looking for Mono on the beams.

The Teacher extending her neck to get Mono.

The Teacher hunting for Mono in the library.

The Teacher exiting the School's library.

The Teacher stuffing a frog into the frog jar.

The Teacher inside the School's laboratory.

The Teacher at her piano.

The Teacher chasing Mono in the vents.

The Teacher searching for Mono and Six in the rainy streets of the Pale City.

The Teacher looms over the fearful boy.

Closeup of the Teacher's portrait in the Residence.

A painting of the Teacher that was vandalized.

A painting of the Teacher turning her head all the way around. 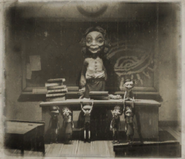 A picture of the Teacher and some Bullies.

A close-up photo of the Teacher.

A sketch of the Teacher that is found on a dart board. 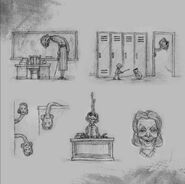 Early concept art of the Teacher. 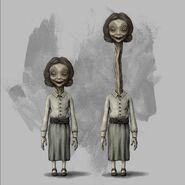 Concept art of the Teacher.

Concept art of the Teacher teaching the Bullies in her classroom. 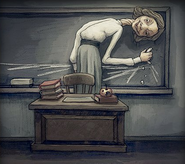 A close-up of the Teacher turning her neck all the way around.

Up-close image of the Teacher's ruler from the trailer.

The Teacher standing before Six and Mono.

The Teacher appearing on the box art on the left.

Art including the Teacher made to promote the School demo. 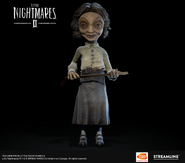 A poster of the Teacher's model.

A poster of the Teacher and Bullies.