Little Nightmares Wiki
Register
Don't have an account?
Sign In
Advertisement
in: Articles with a placeholder name, Children, Characters,
and 5 more
English

Unknown
The Toddler[1] is a character from Episode 2 of Little Nightmares Comics.

The Toddler is a young child wearing nothing but a cloth diaper and a blindfold wrapped around his head with a feather or leaf tucked into it, which covers his brown hair. He carries a vermilion bindle that he rests on his shoulder. The Toddler appears quite a bit younger than other children seen so far in the Little Nightmares universe.

The Toddler seems to have good survival instincts, as it is hinted that he has been surviving by himself for a while. He also appears to be naturally curious, investigating noises instead of pressing on.

The episode begins with the Toddler discovering an animal's burrow in the Wilderness. He climbs down into the burrow and finds a fresh corpse of a white animal. He is seen removing meat from its corpse and storing it in his knapsack. Then, as he begins to climb out of the burrow, clawed paws burst out of the earth and overwhelm the Toddler. As it turns out, this was a nightmare and wakens the Toddler up with a startled gasp. Frightened by his dream, the Toddler flees the burrow quickly and comes to rest at a tree. However, a strange shriek draws his attention, and he follows the sound to a rotten outhouse. As he investigates the outhouse, a television behind him suddenly illuminates. This draws the Toddler's attention, and he looks as the Thin Man begins to emerge from the screen. Strangely, the Toddler appears to smile and slowly begins to remove the bandage around his head. Suddenly he screams and disappears into the television.

The Toddler coming out of the Wilderness. 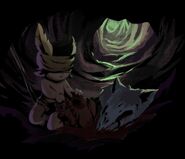 The Toddler unpacking a dead wolf.

The Toddler dreaming about being grabbed at.

The Toddler awakening from his grabbing dream. 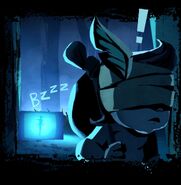 The Toddler noticing the light. 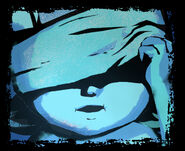 The Toddler peeking at the light just before meeting his fate.

Mono and Six with the Toddler, the girl with braids, the Fat Kid, and Ghost.