Tobias Lilja or Christian Vasselbring
The Viewers are the fourth minor enemies in Little Nightmares II, encountered in The Pale City chapter.

The Viewers live life through the screen and cannot imagine a world without it. All those wonderful colours, sounds and shapes, dancing before their eyes, mesmerising them, pacifying them, fattening them up. The Transmission gives them all they need, and demands only one thing in return...

Like all adult characters in Little Nightmares, the Viewers tower over Six and Mono, standing three times their size. Aside from that, the Viewers are perhaps the most human-looking monsters in the series, having almost normal body proportions save for slightly larger-than-normal heads; and dressing in casual or business casual attire. They also have different hairstyles, some even being almost bald, and also some being somewhat obese compared to the others. The Viewers' faces, however, reveal their true nature. Their faces appear to have been removed or wiped off completely, covered now by twisted folds of flesh that appear to have imploded or sunken into their skulls, some even appearing to have concave faces of which is likely because of almost constant exposure to the Transmission from the Signal Tower. As they watch televisions, the Viewers emit a deep, unnatural clicking sound akin to a Geiger counter. When angered, the Viewers' clicking turns into a gutteral, crackling roar, and their movements appear unnaturally jerky and stuttering, akin to stop-motion animation or a sped-up film reel.

The Viewers seem to be so addicted to their televisions that when Mono distracts them in any way, they will attack him. It is also shown that if a television turns off or if they are no where near one, the Viewer(s) will apparently attempt to vent their frustration on any living thing they see, specifically Mono himself. If any of them were to get close to the boy, they'd emit a sonic frequency from their heads that would lead to a game over. Mono is able to stop the Viewers pursuit of him by either turning on a nearby television or luring them to ones already on. Luckily, their television addiction can be used against them, as when a Viewer sees a television or Mono, they'd run towards them at full force and pay no attention to their surroundings, which would most likely kill them depending on where they are.

Mono and Six go outside and into another apartment building, Inside they find one Viewer peering through the crack of a door, one watching T.V. in the hallway, and another watching in the bathtub.

After losing Six to the Thin Man, Mono will find a remote allowing him to interact with the televisions in the Pale City, turning them on or off. Mono will use the remote on a female Viewer, turning on a television hanging outside and turning off the one she is watching. The Viewer will run to the window and resumes watching the screen, as Mono uses the televisions to teleport outside. Later, Mono uses the televisions to make a Viewer fall off a building. On the roofs of the buildings, Mono will find several Viewers observing the Black Tower from afar, some of whom will fall off the building. After Mono pries off some of boards blocking a door, a male Viewer will come out and chase Mono until he electrocutes the Viewer in water. Mono does the same thing again to a female Viewer after luring her into the bathroom of another building. Mono passes by a large crowd of Viewers in an alleyway of the Pale City.

Mono then lures two Viewers away from a television in an alleyway and to looking at one in a shop, allowing the protagonist to travel through the one currently unoccupied. However, a crowd of Viewers standing behind a fence notice him messing with the television and break down the fence to get to him. While he is able to get away in time by going through the TV, he doesn't get far, as he travels out of the TV he set up for the two Viewers earlier. With every Viewer in the area out for his blood, Mono runs through the shop and narrowly escapes through another television just before they could catch him. 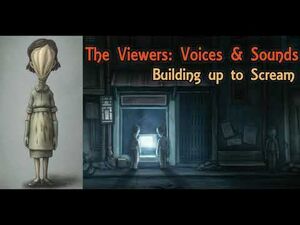 A Viewer who has been completely consumed by a television.

Viewers' clothes being left on seats in a restaurant in the Pale City.

A Viewer's clothes being hung on a noose.

A Viewer that seemingly died by smashing his head through a television.

A Viewer peeking through a door.

A female Viewer watching a television in the hallway.

A Viewer watching television in a bathtub.

A female Viewer watching a television in her quarters.

A Viewer about to fall to his death.

Several Viewers standing atop buildings, basking in the blue light of the Signal Tower.

A crowd of Viewers watching a television in a rainy alleyway.

Two Viewers watching a television while a crowd of them stand behind some fences.

Mono aggravates two Viewers by teleporting through and breaking the screen of a television.

The Viewers breaking into a shop in an attempt to kill Mono.

The Viewers being distracted by televisions in a shop temporarily while Mono runs away.

Mono about to escape the Viewers narrowly.

A painting of a Viewer found in the Wilderness.

A painting of a male Viewer found in the Pale City.

A painting of a different male Viewer found in the Pale City. 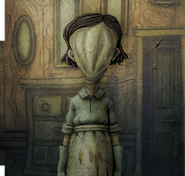 A painting of a female Viewer found in the Pale City.

A painting of a third male Viewer found in the Pale City.

A painting of a female Viewer's lower body found in the Pale City. 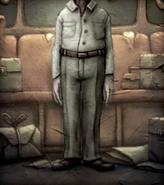 A painting of a male Viewer's lower body found in the Pale City.

A distorted painting of a male Viewer.

A photo of a group of Viewers staring at a TV.

A photo of two Viewers sitting on a couch.

A photo of the lower half of a male Viewers body.

A handful of drawings, one depicts the clothes a Viewer left behind.

Concept art for a Viewer watching a television, looking more similar to that of a Guest.

Concept art for Viewers, most of these being used in the final product.

Concept art of Viewers in the street watching TV.

Concept art of a Viewer that was sucked into a TV.

Some concept art for city background advertisements, some involving Viewers.

Extra concept art including some Viewers having been sucked into TVs and a Viewer watching a TV in a bathtub. 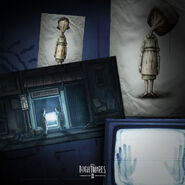 Several Viewers watching a television in the announcement trailer.